More space between desks, smaller meeting rooms and more windows: what the future of offices will be like 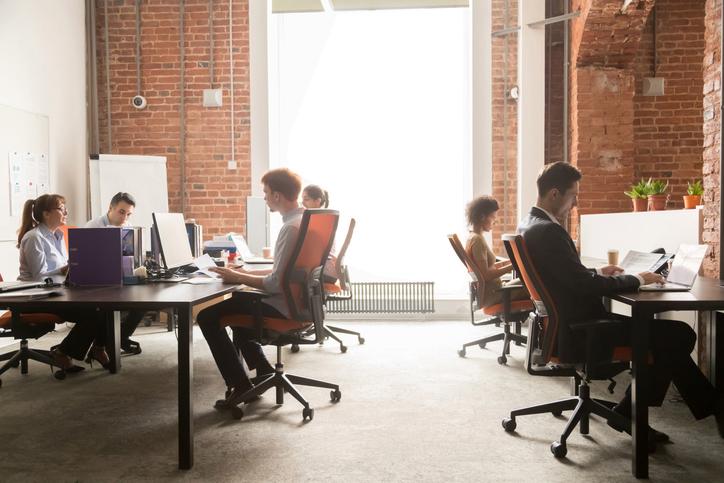 “We have seen a great demand from companies looking for solutions to get back to work in this challenging scenario,” says architect

The customized tables, with picture frames, dolls and little plants, are numbered. In the office of the future, in the post-pandemic, there is no room for accumulation nor for piled up objects.

The furniture, separated by acrylics, will be shared and will have space only for the computer, mostly laptops.

Personal objects, such as bags and even office supplies used in daily life, will be stored in lockers, installed in spaces far from the work area.

Meeting rooms will have their capacity reduced and, in some cases, will be opened to allow greater ventilation in the environment. Even windows, non-existent in some buildings, may have their space back. The idea is to create alternatives to improve air circulation and prevent the virus from spreading in the office.

These are some of the proposals being made by architects to companies that want to change the layout of offices after social isolation.

“We have seen a great demand from companies looking for solutions to get back to work in this challenging scenario,” says Douglas Enoki, architecture manager at IT’S Informov.

He says that the concern of the clients is to reduce the thickening of the offices. And this is only possible with table spacing and higher employee turnover.

With the good performance of home office workers during the crisis, companies understood that they should keep work remote for at least a few days a week. In other words, the rotation of workers in offices will be greater and will require fewer desks in the spaces.

“We experienced a new way of working that is working and we will continue with the development of this culture,” says Antonio Carlos Duarte Sepúlveda, president of Santos Brasil, a company that manages one of the largest container terminals in the country.

The company hired an architect to make changes in its office in São Paulo. “We are studying a new layout that, due to the home office, will contemplate the sharing of workstations, besides more meeting rooms with videoconferencing equipment”.

That has been a recurring request. Studio BR Arquitetura partner, Bruna de Lucca, says she is currently working on a project in which she will reduce the number of desks installed in an office from 130 to 65.

“The company wants us, besides the spacing, to put acrylic partitions to separate the desks and, thus, protect the employees”. The coffee area will be expanded from 70 square meters (m²) to 100 m², and the meeting rooms will be opened.

Architect Liana Tessler Szyflinger of Liana Tessler Architecture and Interiors says meeting rooms have been a major concern for companies in the post-Covid-19 return.

In her projects, she has sought to create rooms with “U” shaped tables, which allow for a distance of 2 meters between people. “Many offices are changing. Some, 100% of the layout; others, a smaller part, because the future is still very uncertain”.

For architect Thaisa Bohrer, the office of the future will be more standing on the ground, with more windows, openings and ventilation. In her assessment, the working environment in the post-pandemic will be more cozy and more pleasant. There will also be more decompression spaces for people to meet when they are not in home office.

“We’ll have a break from everything that’s been adopted so far,” she says. “Eventually we’ll go to the office and we won’t have a pencil holder and dolls on the desks anymore, which will be multifunctional and multi-user.

That’s what XP Investments should do in the post-pandemic. The idea is to transform the current offices into concept offices, which will serve as support for specific training demands, face-to-face dynamics, reception of clients and partners.

“Let’s value more rotating, more communitarian environments,” says Guilherme Sant’Anna, XP’s partner and head of People & Management. The company decided to extend the home office until December, but even then the employees who want to continue in the remote work.

The architect Roberto Loeb believes that, in the post-pandemic, the face-to-face meetings in offices will be in specific occasions, such as defining projects, work goals or training. For him, the offices will be smaller, with strong organization of social and cultural spaces to receive the employees in those moments.

“They will be places for the meeting to strengthen the bonds between employees and directors. Physical distance will be a process to be developed through training and guidance so that the work is efficient and creative”.

“Technology and hygiene routines will make the difference in the offices”

Post-Pandemic offices will have plenty of technology to avoid touching. From the arrival door to the restrooms, the idea is to create automatic drive systems that prevent workers from touching the parts.

In the access control of the employees, the companies must adopt the QR Code (two-dimensional bar code) or facial or iris reader.

In the bathrooms, some projects already foresee foot actuation for flushing valves and automatic actuation for taps, soaps and hand dryers. “There is also the actuation of lighting sensors in the rooms to avoid contact with the switches,” says architect Liana Tessler Szyflinger.

All this technology will have to come with a new protocol regarding the hygiene of common areas.

“The common and periodic cleaning will be replaced by daily routines of hygienization of environments and surfaces with special products, in addition to all the materials that enter the office,” highlights the architect Bruna de Lucca.

For this reason, the projects of new layouts foresee external benches to wash hands, spaces to sanitize shoes and totems with alcohol gel, masks and gloves. All this at the reception of the companies, before entering the offices.

“After that moment, many things will have to change. Besides the cleaning routines and changing the spaces, we will do the temperature measurement to give more security to the employees who will be in the office”, says Gabriela Duarte, general manager of Operations of Plug and Play Brasil, innovation platform that has been making changes in the layout of the company. According to her, the expectation is to reduce by 50% the occupation of the office and meeting rooms.

Another point that should deserve attention is the air conditioning hygiene system. “Every two months, it is necessary to clean the appliances, but today many companies do not meet this determination,” says Bruna.

In the post-Covid-19 period, this type of posture will have to change in order not to expose employees to contamination risks. “The dynamics will change, the spaces will be transformed and there will be a reduction of work areas,” says Renato Dal Pian, an architect at the Dal Pian office.

One of the most radical changes within the offices, in the assessment of architect Roberto Loeb, will take place within the meeting rooms.

He states that the trend, after this period of confinement, will be the improvement of the equipment and digital systems to give more agility in meetings at a distance.

“Today we already have these instruments, but no doubt we will have more versatile and lighter designs with strong universal accessibility”. He bets on the use of 3D, holographic images, which will allow executives to talk and meet with other people as if they were physically present.

“Let’s open windows in the building”

The São Paulo Supermarkets Association (Apas) was in the middle of reforming its office when the coronavirus crisis hit the country. To free the building, located in Lapa, in São Paulo capital, the 120 employees went to a coworking space and then to the home office, with the beginning of social isolation.

The project, which already foresaw a series of changes, had to go through new adaptations, says the superintendent of Apas, Carlos Correa.

According to him, one of the changes will be the opening of windows in the building for better air circulation. “Our building is all glass and has no openings. But we want to have that option so that in some moments we can open and let the breeze in”. He states that the property has an outdoor area, which will be improved for use during meals.

In the association, the home office will continue in the post-insolation social on some days of the week. In addition, other measures to reduce the agglomeration of people will be adopted. There will be flexibility in the times of entry and exit and scheduling during meals.

On the return from the post-Pandemic, the association’s office will not have desktop computers, only laptops. The telephone system has been replaced by voIP technology.

“Thus, we eliminated the landline and we can answer the calls via cell phone or computer,” says Correa. “We’ve learned a lot in the last 45 days and lost the relationship with the physical space.”