Intensive care capacity: the number to be observed during the battle against COVID-19.

To protect our lives, the capacity for intensive care must be increased within weeks, not months. Although some countries and regions have more capacity than others, everyone needs extra capacity. The cost hardly matters, since for each month that health systems stay ahead of the peak of patients in need of intensive care, we save lives and save a trillion dollars of GDP. How much should we increase capacity? It depends on the starting point of each country, but in most cases, four to five times. This increase is possible and is part of the focus of the health response worldwide. However, we strongly suggest to healthcare leaders to put this at the top of their list of priorities and that of their colleagues: start observing the capacity for intensive care. Below, we describe the need and possible actions to increase the capacity for intensive care. Since the explosion of COVID-19, most countries have been adopting public health measures to “flatten the curve” and accepting the simultaneous economic downturn. Although the effectiveness of different approaches can be debated, these measures have been essential to gain control over the growth of the pandemic. The unprecedented increase in unemployment in the USA in recent days is also an omen of human suffering due to economic turbulence. As we noted earlier this month, the virus could cost the world economy $ 1 trillion to $ 1.5 trillion in the second quarter of 2020 alone. In the United States, every four weeks of downtime can cost the economy about $ 200 billion GDP1. In particular, those working in the travel, restaurants and transport sectors are at risk, as are a large proportion of families worldwide. Even in advanced economies, such as the United States, 25% of families live off wages, and 40% of Americans cannot cover an unexpected $ 400 expense without borrowing. The race has begun to increase the capacity for intensive care. Expanding the capacity of health systems is vital to saving lives, as an overloaded system results in a substantial increase in the mortality rate and can delay our return to normality (Chart 1).

The two main questions now are: what do we control? What should we focus on?

Increase the capacity of healthcare systems at the speed of light The intensive care capacity corresponds to ICUs, necessary hospital supplies and respirator units for patients, in addition to a trained workforce that has what it needs to do its job. Although some of the following actions are already underway, leaders should consider the following steps taken together: Stop all non-emergency care in hospitals and other places of care, which would release, almost immediately, up to 30% of the capacity of beds and health professionals and part of the capacity of respirators and personal protective equipment (PPE). Many countries around the world have already done this. Increase essential supplies – such as PPE, respirators – to keep current facilities fully functional and keep healthcare professionals safe. See Box 2 below for steps we can take now that are able to expand the available supplies by six to eight weeks. Train more frontline employees (for example, nurses trained in treatment with mechanical respirators) to allow for increased capacity. In Asia and Italy, curricula were developed to train health professionals in a matter of days. Independent health services in all countries should implement similar plans to increase the workforce.

Create alternative hospital capacity (for example, field hospitals, convert outpatient facilities into facilities for acute staff, convert non-health facilities into facilities for acute staff – hotels, dorms). Temporary hospitals were built in a matter of weeks in China earlier this year, when the country was experiencing the biggest increase in patient numbers. With the help of the United States Army Corps of Engineers and the Federal Emergency Management Agency (FEMA) and the mobilization of the armed forces at a war pace, it is likely that the United States will be able to develop the necessary wavebed capacity within six weeks. These are facilities that, during normal periods, would not be considered hospitals, but which, in an extreme situation, can meet the needs of the affected population. Enable strategic health capacity in military health systems or other defense health systems worldwide. Accelerate the approval of treatments, as well as the expansion of the manufacture and distribution of treatments that reduce the severity of the disease or the duration of the need for intensive treatment, thus reducing the length of hospital stay. 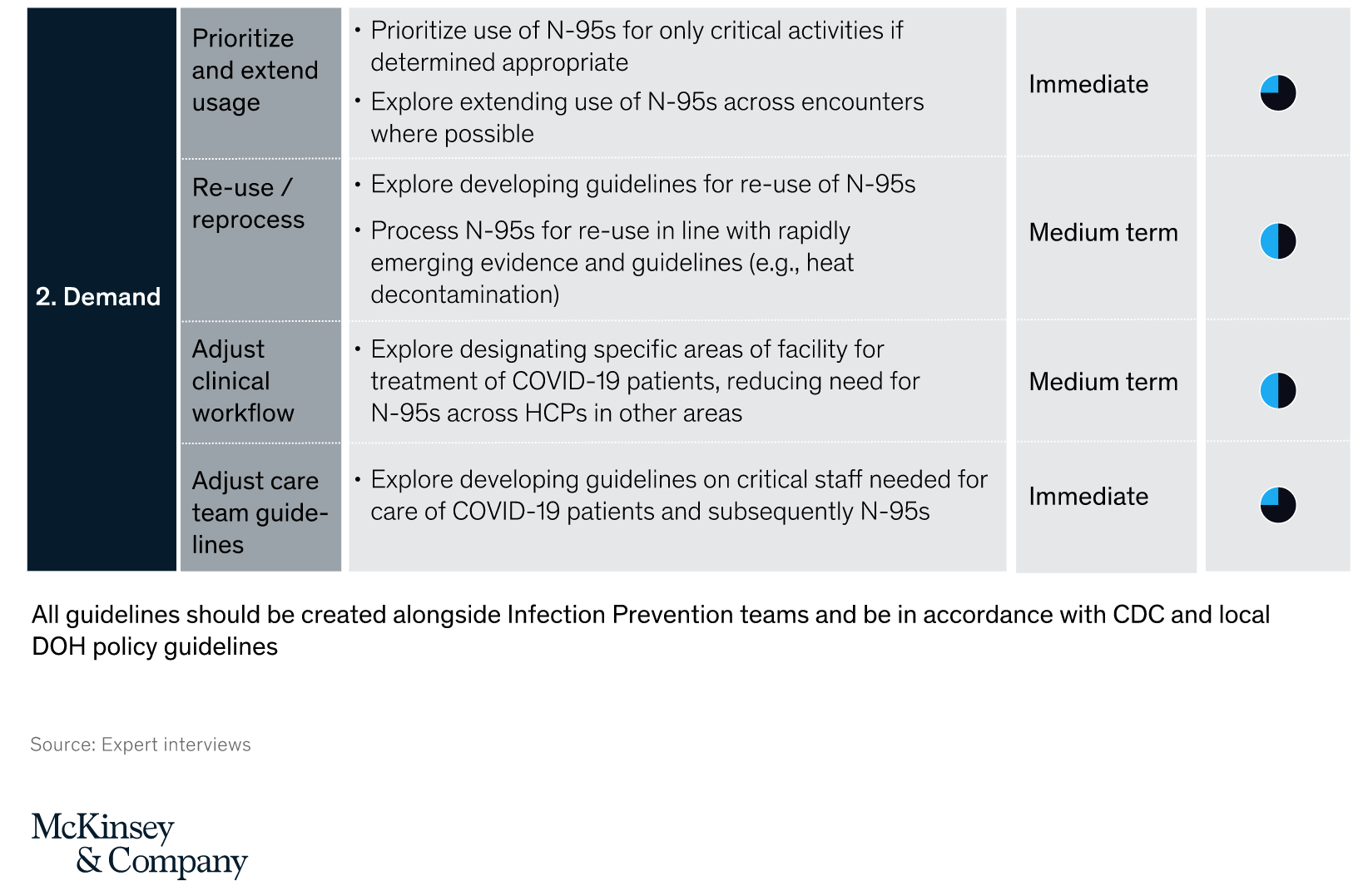 Decrease the demand for intensive care Most countries and states / provinces have implemented public health measures to slow the spread of the virus (for example, physical distance, confinement, closure of public areas, such as beaches and sports courts). As there is no vaccine or prophylactic treatment in sight, the risk of further spread continues to be real. At the same time, given the great impact of these public health measures on people’s livelihoods, all leaders are seeking a balance in managing the growth in the demand for intensive care, while mitigating the strong downturn in economic activity. Some actions can be crucial to achieve these dual goals: